Class began with the LA in the news by Joseph Z. The article was about a rejected bill by the Miami County Commission, that would have helped to reunite Cuban immigrant families. This article is an example of how LA news coverage in the US depends on regionality. https://www.miamiherald.com/news/local/community/miami-dade/article237555054.html

The topic of the class was modern Venezuela and its mass migration issue. Important questions to think about are:

In addition, here are some of the graphs that we looked at, displayed by the OAS: These graph help to provide a global context, but there are concerns about how readable they are and how relevant/accurate the other data is. The argument made by the graphs is highlighted by the use of red to show the dangers of the forecasted migrant numbers.

Overall, the factors causing much of the migration include:

I liked the feedback that I received. It mentioned multiple areas that I should revise that I hadn’t thought about. Specifically, there’s an area on the “La Violencia” page about conspiracies that makes up about a third of the page. This was mentioned to have too much importance compared to the other sections. It was generally helpful advice.

This event is presented mostly as a conflict where the left radicals are inciting violence, when in reality both sides incite violence and retaliate. This bias heavily supports the Colombian government, giving less information on the rebels issues. The sources are actually decent, when they are used at least. There are many secondary sources by notable historians, however there are multiple unsourced areas. Improving this article requires the addition of sources to back up unsourced claims, as well as including information on the Colombian government’s violence—not just the rebel’s.

Everything in this article is on topic and provides relevant information on the ELN. The article is also very neutral. It provides the viewpoints of the ELN and the groups/countries it interacts with, without interjecting any other opinions. The most represented viewpoints are those of major world powers and especially the Colombian government, but they also provide the most accessible information. Most of the citation links work, however one did lead to a page not found. Many of the sources used were news articles written about the ELN which were a little biased, but they were only used to pull facts. The “history” section of the article does not have enough citations, and the information on the formation of the group is not cited at all. The information seems to be up to date as it goes up to 2019; it only could be missing things from the past couple months. There is only one real conversation on the talk page mostly about the page being biased against the ELN. The article is rated C-class and is part of the Colombia, Terrorism, and Military History WikiProjects. They way this article discusses information is different from our in class discussions because it purposefully does not analyze, or mention historians or themes.

On Thursday, September 19th, the US State Department expelled two Cuban diplomats, citing that they were working on “influence operations against the United States.” The State Department provided no further details on what actually occurred. The department’s spokeswoman, Morgan Ortagus, could only label the alleged operations as, “activities harmful to US national security.” Along with the expulsion of the two diplomats, all other members of the Cuban mission to the UN have been restricted to the island of Manhattan.

Cuban Foreign Minister Bruno Rodríguez released a string of tweets immediately following the incident, calling the accusations “vulgar slander.” He stated that the US is seeking to provoke a diplomatic escelation that would lead to the closing of embassies and a strengthening of the embargo of Cuban goods.

I strongly reject unjustified expulsion of 2 officials from Permanent Mission of #Cuba to the #UN & increased restrictions of movement imposed on our diplomats & their families. Allegations that they engaged in actions incompatible with their diplomatic status is a gross slander.

These allegations of the Cuban diplomats came not too long after the suspected attacks on US diplomats in Havana. The US accused Cuba of using sonic weapons to cause ill effects on members of the US embassy, who reported dizziness and hearing loss. However, a Canadian study, published on the same day as the expulsion of the Cubans, suggested that neurotoxins from widely used Cuban pesticides could be to blame for the cognitive damage—not sonic weaponry. 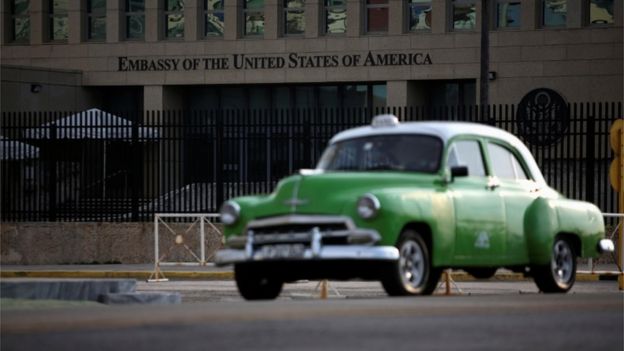 US diplomats began experiencing symptoms in 2016

The information above is what I gathered from three different sources: CNN, Fox News, and BBC News. As expected, the BBC was the most neutral of the three, keeping their story short and to the point. CNN was also very neutral, but they included by far the most information, a lot of which could be used to defend Cuba in this situation. Finally, Fox News took a subtle anti-Cuban stance—expected from a conservative source. They used very strong rhetoric to describe the situation saying, “the Cubans were found to be running spy operations on American soil,” and they didn’t mention anything from the Cuban side of the story, unlike the BBC and CNN.

It is interesting to see the implications that world context can have when looking at revolutions. The Cuban revolution was more than half a century ago, yet it affects the foreign policy of other nations today. Had the revolution happened at a different time, one that wasn’t as close to the Cold War, the present situation may have never occurred. A long string of events stemming from the actions of Fidel Castro, has led to a Diplomatic struggle he could have never seen coming in 1953.