The feedback I received help me realize some areas that I could be overlooking. Specifically, I had not considered how it would be good to discuss MRTA’s inspiration from Tupac Amaru and what that means in the Peruvian context. I had planned to add the stated goals of the organization, but I had not intended to discuss the historical relevancy of Tupac Amaru aside from linking to the page. Feedback also suggested I incorporate information about the role of gender in MRTA, something I would probably have overlooked.

We began class with an overview of some of Dr. Holt’s responses to popular concerns from the class about Wikipedia projects. See Wikipedia Project Support for detailed responses. We also discussed a message Dr. Holt received from another Wikipedia contributor as an example of systemic biases in Wikipedia articles as well as other users, and in general the considerations to be made in communal online projects.

Today we began working on Chile and began with a review and discussion of what a revolution (versus a reform movement) entails. This discussion revolved around events we read about in “Chapter 6: Chilean Road to Socialism” in Twentieth Century Latin American Revolutions by Marc Becker. Dr. Holt encouraged us to treat the narrow election of Salvador Allende and the coup d’etat led by General Augusto Pinochet as two distinct events that could be assessed as revolutions or reform movements themselves. Some students argued that Allende’s adherence to the Chilean constitution meant that he was a reformer, despite his ambitious, transformation proposals to move the country toward socialism and in doing so change key socio-economic systems. Other students argued that Allende was revolutionary because of the scope of his reforms, even if he pursued them through legal means. There was wide consensus that Pinochet was not a reformer, but some disagreement on whether he was revolutionary rather than a reactionary to changes begun by Allende. We also touched on the world context of the Chilean revolution, specifically the Cold War and U.S. fear of socialism and communism spreading, as well as the U.S. role in supporting Pinochet through activities like Operation Condor.

There was no Latin America in the News today.

Revolution versus Reform Movement (see HAP from 8/23 and DeFronzo ch. 1)

Operation Condor: Network of secret police that operated in Chile, Argentina, and other nations with military governments in Latin America. Operation Condor targeted political opponents of Pinochet’s regime who had fled the country, as well as refugees with no overt political agenda. Condor was supported by the United States through the CIA with supplies, training, intelligence sharing, and logistics.

Were Allende/Pinochet revolutionaries or better characterized as something else? Defend your answer.

What internal issues did Allende face that weakened his government?

What factors contributed to Pinochet’s substantial support, despite his brutality?

The Túpac Amaru Revolutionary Movement (MRTA) page is informed largely by sources critical of the movement, and consequently they are cast in an overtly negative light. The article is largely accounts of their criminal and terrorist activity, with very little from the perspective of members and collaborators. The MRTA was of course unambiguously violent and guilty of violating international humanitarian law. To improve the article, I would likely look at sources that discussed the trials related to MRTA members, as well as any manifestos or statements issues by the group on their stated goals. The talk page also has multiple instances of editors drawing doubt on the accuracy of information released by the Peruvian government. 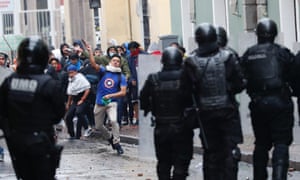 On October 3 the Guardian reported that the President of Ecuador, Lenin Moreno, had just declared a State of Emergency in response to widespread strikes over the end of Ecuador’s 40-year fuel subsidy. The main supporters of the strikes are taxi, bus, and truck drivers who are severely impacted by the loss of the subsidy, as well as students, unions, and indigenous groups. The article makes no claim about general support for the strikes outside of these groups.

The strikers have so far blocked roads in Ecuador’s two largest cities, Quito (the capital) and Guayaquil (a port city), using the vehicles of taxi, bus, and truck drivers (the largest supporters of the strike). Strikers have also had several clashes with police, including one instance where masked strikers threw rocks at riot police, who responded with tear gas and armored vehicles. So far there have been 19 arrests for strike-related activities. 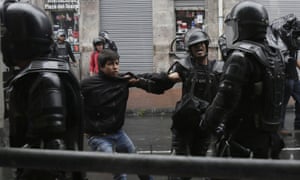 Moreno, the President of Ecuador since 2017, justified the State of emergency as necessary to “ensure citizen’s security and avoid chaos”. A State of Emergency allows the government to suspend certain freedoms and to use the armed forces to reestablish order. During a press conference, President Moreno condemned the fuel subsidy as “perverse” and argued that in it’s forty years of existence it had severely harmed Ecuador’s development. Ending the fuel subsidy would alleviate $2.27 billion out of a target $3.6 billion deficit reduction goal of Moreno’s government. President Moreno went on to say that protesters would not “paralyze” Ecuador. The Article also noted that three presidents between 1997 and 2007 had been removed though similar street protests.

I selected this article because it was the most detailed report on the story unfolding in Ecuador. An overview of other major news outlets yielded some conspicuously weak coverage. The BBC’s report had minimal detain but kept a relatively neutral tone. The New York Times coverage had more detail and contextual information and touched more on the disruption of business in Ecuador (including international travel). The Washington Post’s coverage was noticeably more critical of strikers and protesters, at least relative to the other outlets I looked at. Ecuador is portrayed as suffering from systemic economic issues as well as a tendency towards violence in protests.

Considering the statements by President Moreno and various protesters, unrest in Ecuador appears to be explained by political differences. The President is interested in ending subsidies, cutting corporate taxes, and working with international institutions to improve the economy. In February, he negotiated a $4.2 billion deal with the IMF, which is distrusted by many Ecuadorians who blame international forces with austerity policies. A sentiment apparent in many statements form protester is that the government has failed to keep promises and that they have not benefited citizens. This seemed to align well with what John Chasteen described and the right-left political spectrum in Latin America. Moreno’s policies cast him as a neoliberal, while the protesters support for subsidies and rejection of external influence is in line with Nationalism.

Some of James DeFronzo’s characteristics of successful revolutions are present here as well, notably mass frustration and political crisis. Support for strikes seems weaker among middle-class business owners (based on limited information) however, and it is unclear if elites are divided or if there are major external pressures on Ecuador.

The Wikipedia entry on Frank Pais at times struggles to remained focused on Pais himself and not on activities of the 26th July Movement in Santiago de Cuba. Since Pais was recognized as a key leader and organizer of urban resistance, this is not entirely inappropriate, but the article contains information that cannot be definitively attributed to Pais, as much as it makes sense too.

There was no overt bias or odd methods of framing the content of the article. Pais is discussed almost entirely in the context of the 26th July Movement activities in Santiago de Cuba. Considering he was executed at 22 years of age and his role in the revolution was his most noble accomplishment, this does not detract from the article. No viewpoint is over or under represented, and the article maintains a factual, neutral tone throughout.

A few of the citations on the page do not work (both labeled as such and not). many other citation links lead to pages of dubious credibility (non-academic, blog sources). Many pieces are biased, but do not try to appear otherwise. Two books on the Cuban Revolution are cited most frequently, and there are a few sources in Spanish (likely authored by Cubans).

Since the article is about a man who died in 1957 that facts are unlikely to change and there is nothing obviously out of date. There is certainly room for additional information however.

There are minimal conversations on the talk page. Two discussions were made by bots in regard to reformatting citations, and only one conversation appeared to involve direct edits to the content.

The article is part of WikiProject Biography and has a C-class quality rating.