The feedback I received in my three peer review evaluations was mostly positive, with a few elements of constructive criticism. I now plan to differentiate between Espín’s role as a revolutionary overall and her work promoting women’s rights during and after the revolution. I will likely try to find more specific information about her family and how she balanced work with motherhood in addition to transferring existing family information from the lead to a specific section. Having already planned to do so, I will also ensure that use of any biased sources such as those written by Espín or Fidel Castro are presented in context with an acknowledgement of their bias.

How is this aspect of Latin American history represented?

This Wikipedia article is comprised of five sentences, total. All five of those sentences appear to be factual and relevant, describing Hernández’s past and present career and explaining her status as Cuba’s first transgender politician.

Do you see any biases?

The information presented is minimal but relevant, and it all appears to be mostly unbiased. Even less complimentary details about Hernández’s life such as her imprisonment during the 80’s due to transphobic laws are presented in a generally neutral manner.

What kinds of sources are used?

The major problem with this article is that both of the sources used are news articles from 2012 that have since been deleted, leaving all of the information provided essentially without a source. The quality of ABC News and the Vancouver Sun as relevant sources for a Wikipedia article is already questionable, and the fact that both news stories have since been deleted adds further suspicion to the verity of the information being presented.

How might you improve the article to meet Wikipedia’s standards and show your skills of historical research and analysis?

I can improve this article by finding more recent sources, or at least ones that are still in existence; then I can provide citations for what has already been written and hopefully add more unbiased facts about Adela’s career, personal life, political stances, etc. This is a very basic Wikipedia article to begin with, so elaborating on it should be fairly straightforward as long as I can find enough unbiased, good quality sources to synthesize into my own words.

Professor Holt began class today by handing out the midterm review packet and explaining key points of the exam. The main goals she defined for the midterm were for us to show our development as historians, general mastery of the content we’ve covered so far, and our ability to analyze primary sources. Some other important announcements included the alumna event at 4:00 on Monday, September 30th in Kauke 137 with Global and International Studies graduate Lauren Gliss (‘13), new Learning Center exam protocol wherein students must request to take an exam at the Learning Center at least 2 days in advance, and instructions to send Professor Holt an email if anyone would like to improve a Wikipedia article not already included on the class list. Andy presented L.A. in the News today, which was a story about multiple Latin American countries agreeing to place sanctions on the government of Venezuela after being urged to do so by the United States. This is a classic example of the United States interfering in Latin American politics, albeit a less reprehensible one than past instances of stable democracies being overthrown for U.S. benefit.

Next, we discussed today’s reading: “Not Blacks, But Citizens: Race and Revolution in Cuba” by Devyn Spence Benson. Race politics in Latin America are very different from those in the United States, as racism was neither officially institutionalized nor officially criminalized in the majority of Latin American countries. Professor Holt described how in Brazil, which has a similar political situation to Cuba in terms of race, people of African descent have a more difficult time finding jobs and being admitted to universities, as predominantly black schools receive less funding from the government. And especially in Cuba, protesting or even discussing racial issues is seen as counterrevolutionary; Cuba’s society and economic system are dependent on unity, and if one group seeks to define itself as something other than just Cuban, even if others have already done so in a less explicit way, the Cuban government will automatically take issue with it. We then briefly discussed our HAPs in groups, debating the meaning of intersectionality and how racism in Cuba has changed throughout the years.

Intersectionality: a way of thinking about identity that seeks to view individuals’ identities as a whole with many overlapping layers, not split up into different parts

Afrodescendiente: of African descent; this is a label that allows Cubans such as those in the Afrocubana movement to navigate race while still identifying as Cubans

Although there are major differences between Cuba and the United States’ forms of racism, what are some of the similarities? Are there instances of Americans accusing those who protest against U.S. racism as being divisive?

Do you think there is any credence to the Cuban government’s assertion that any attempt to combat racism would result in race wars or other extreme divisions in the Cuban population? Do you believe that the Cuban government genuinely believes in those statements, or could they have other motivations for allowing the perpetuation of racism?

If the Cuban government were to acknowledge racism within Cuba and its effect on Cubans of African descent, how could it begin to effectively combat racism and rectify past wrongs?

A Look Back at the Afro-Cuban Films of Sara Gomez, Cuba’s First Female Director

Race Toward Equality: The Impact of the Cuban Revolution on Racism

Afro-Cuban Voices : On Race and Identity in Contemporary Cuba

The Wikipedia page for the Cuban Literacy Campaign is poorly organized, biased, and in need of more concrete sources of information. The article provides some useful information about the movement’s overall organization and effect, but said information is not presented in a straightforward manner. The section titled “Challenges” contains information that is either irrelevant to the title of the section or irrelevant to the article as a whole. Some of the information is useful to understanding the topic being presented, but it makes up only a couple sentences of the section and is presented in a sensationalized way with poor sources.

The article appears to be biased in favor of the Cuban government, containing many claims that the movement described is the greatest in history. It makes a controversial (if believable) claim regarding U.S. interference in Cuba, but fails to reinforce that claim with concrete evidence. In addition, the article uses several inspirational yet vague quotes from Fidel Castro and other notable leaders in lieu of unbiased description of the topic. This article is representative of only Cuban viewpoints on the movement and its related movements; given that one of the related topics mentioned is expansion of the literacy campaign to other underdeveloped countries, it would be interesting to see the viewpoints of those countries on the subject.

Several of the links do not work; those that do work lead to sources that seem biased or not useful as a scholarly source for an article written in English for English speakers; examples include a couple of poorly translated articles from Cuban news sites and articles published by the Cuban government. The biases of these sources are not noted in the article. The vast majority of claims are cited, but it is hard to analyze the quality of their sources as they are generally books or articles that cannot be accessed online. None of the sources used were published after 2010. This means that any recent developments on the topic of literacy in Cuba have not been added as they occur.

There are only a few conversations on the talk page; two are civil discussions about ensuring the article is linked to versions of it in other languages and making sure statistics are correct, while another is a poorly phrased critique about the article’s bias. The article is rated C-class and low importance, and is included in WikiProject Cuba (inactive) and WikiProject Linguistics.

This Wikipedia article makes little to no effort to present information in an unbiased way, only represents one viewpoint, and does not acknowledge its biases. We have not discussed this topic in depth in class, but if we had one would assume that we would do so in as unbiased and factual a manner as possible.

The Brazilian government has deployed military planes equipped with firefighting equipment and 44,000 troops in an effort to put out the fires currently destroying large portions of the Amazon rainforest. These fires had been allowed to burn unhindered until international backlash forced President Jair Bolsonaro to make a genuine effort at mitigating the damage to both the rainforest and to his reputation. Despite claiming to have “zero tolerance” for those accused of environmental crimes, Bolsonaro has himself been fined for fishing in a protected area (Londoño 2019). In addition, Bolsonaro has actually called for the abolition of environmental protections, and has expressed the desire to allow industries to more freely access protected areas. Under his regime, those in the mining, logging, and farming industries have felt free to destroy portions of the Amazon to further their own interests. 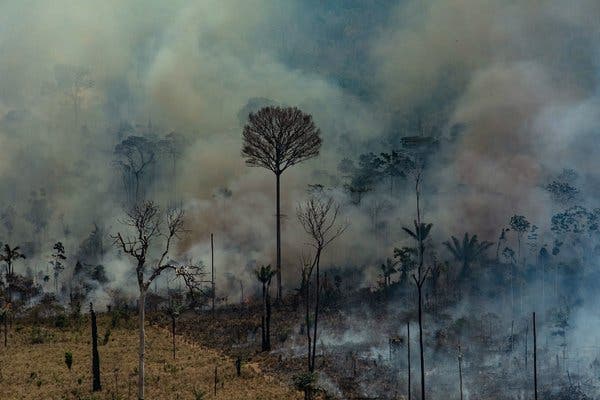 Pictured: One small portion of the expansive rainforest fire (Londoño 2019)

President Bolsonaro’s lack of regard for the preservation of the rainforest is only tempered by his concern for the economic status of Brazil. He had initially dismissed concerns about the forest fires, but announced the military intervention plan when threatened with cancelled European trade deals and boycotts of Brazilian products. Many Brazilians are still unimpressed with his evidently self-serving efforts to put out the fires; they can see that his motivations are not sincere, and they want a more concrete plan for rainforest preservation. Despite constant backlash and concrete evidence to the contrary, President Bolsonaro claims that the rainforest is not burning, but that the areas on fire are those that have already been deforested (Londoño 2019).

Every part of this article is based on facts, from the accurate if somewhat cartoonish depiction of Bolsonaro as a semi-despotic leader intent on destroying the rainforest to the discussion of European impact on Brazil’s fate. But it is also important to examine what facts are not included in the article; the author is an American who has written a news article meant to be read by Americans, which means that everything is shown from a Western point of view. The impact of the Amazon fires on the tribes that depend on the rainforest for their survival is glossed over in favor of a statement from a Greenpeace representative (“Amazon rainforest fires: Ten readers’ questions answered” 2019). Nor is there any direct exploration of the accusation that the fires were started by smaller businesses emboldened by Bolsonaro’s lax enforcement of environmental protection laws (“Amazon rainforest fires: Ten readers’ questions answered” 2019). Western intervention’s effect on Bolsonaro’s actions is the focus of the article, not the actions or struggles of Brazilian citizens.

The intentionally set fires in the Amazon are a perfect example of Western ideals negatively impacting a formerly colonized country. Smaller farming and mining corporations, doubtlessly run by those of European descent given their lack of regard for Amazonian tribes, feel the need to destroy swathes of rainforest in order to compete with larger businesses. Ruthless, environmentally blind capitalism is an inherently Western idea, as is evidenced by continued conflict over and use of fossil fuels, and increased use of cheap, single-use plastics in manufacturing in Western countries like the United States and the United Kingdom. Brazil follows the unfortunate path of many decolonized countries by imitating the often harmful policies of Western countries in order to make a profit and attempt to establish itself as a major world power.

Adams, Char. “Amazon Rainforest, Known as ‘The Planet’s Lungs,’ Has Been Burning at a Record Rate for Weeks.” People, August 21, 2019. https://people.com/human-interest/amazon-rainforest-fire-burning-record-rate-brazil/.